It has been said over and over that winning doesn’t come easy, but someone perhaps forgot to mention that to Carmen Maciariello the 42 year-old first year head coach of Siena College.

Success has come quickly at Siena under Maciariello’s tutelage, winning the 2019-20 MAAC regular season championship following a 20-10 season which included ending the year on a 10-game winning streak before it was eventually canceled due to the outbreak of the coronavirus.

Siena is Maciariello’s first head coaching position after spending the previous 11 years as an assistant at Fairfield, Providence, Boston University and George Washington.

Maciariello has deep ties to Siena in Loudonville, NY which started when he attended a basketball camp at the school in the fourth grade to being a player for Siena in 2000-01 after transferring from New Hampshire. He has also been an assistant at the program in 2018-19 before taking over as the head coach.

Maciariello was quick to brush off the notion that winning can come easy, he said, “I don’t know if its ever easy but it was very enjoyable obviously.”

On the court, Siena is led by MAAC Player of the Year Jalen Pickett. The Rochester, NY native out of Spire Institute had an impressive sophomore campaign averaging 15.1 points per game along with 6.0 assists which was No.1 in the conference and No.20 in the country. 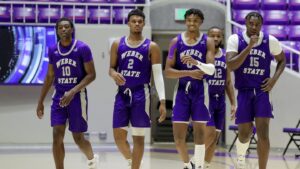 Pickett was also named first team All-MAAC along with teammate Manny Camper who is currently testing the NBA draft waters and has yet to decide if he will return to Siena for his senior year. Camper was No.2 in the conference with 10.4 rebounds per game and also averaged 13.7 points.

Elijah Burns was a grad transfer from Notre Dame who was named second team all-conference this past year but has exhausted his eligibility and will not return for 2020-21.

While Siena was the cream of the crop in the MAAC in 2019-20, there will be an 800 pound gorilla in the conference next season with the addition of Rick Pitino as the new head coach at rival Iona. Pitino has already completely revamped Iona’s roster bringing in some high major talent ahead of the 2020-21 season.

However, Maciariello remains confident in his group of players and sees Pitino’s presence not as a threat but rather as an opportunity to shine more attention on the conference as a whole.

He said, “Its great for college basketball and its great for the league because he’s a Hall of Famer.” Maciariello continued, “Hopefully it brings out the best in everybody in the league and hopefully it will do good things for our notoriety.”

Siena will bring in two transfers including Jackson Stormo from Pepperdine as well as Kyle Arrington from Western Illinois.

In speaking with many mid-major coaches, you often get a sense that their current job is simply a springboard to something else bigger down the road. However, with Maciariello at Siena there seems to be a sense of hunger and excitement to help develop them into a consistent winner over time.

Maciariello said, “At Siena, we want to compete for an MAAC championship year in and year out and make a run in the NCAA tournament and so nothing changes.” He added, “Obviously, I thought we were in a great spot last season but thats done and we don’t need to talk about that because now is the chance to mold this group of young men and make sure they’re hungry and dedicated so we can give it our best shot.”

If Camper does eventually withdraw his name from the NBA draft, Siena will be the consensus favourite to repeat as champions in the MAAC. However, with a very deep and experienced roster no one player will shift the balance of power at Siena and they should be a dangerous team regardless.