With Keli Leaupepe’s hairstyle he certainly wouldn’t look out of place as an extra in the movie Roadhouse.

Loyola Marymount forward Keli Leaupepe has put up some impressive numbers during his first two seasons of college basketball. This season, Leaupepe has started 14 of LMU’s 19 games and is averaging 10.7 points per game along with 4.9 rebounds.

While the sophomore from Melbourne, Australia has put of some impressive stat lines for LMU its his hairstyle that should garner him All-American status.

Leaupepe’s mullet is so epic that you wouldn’t bat an eyelash if you turned on Peachtree TV this weekend and saw him as an extra in the classic 80’s movie Roadhouse starring alongside Patrick Swayze and Sam Elliot.

His mullet is so impressive it would strike envy in the heart of Kenny Powers from the TV series Eastbound & Down and he would also be an excellent cast member alongside Rob Lowe in Youngblood which is another 80’s cult classic film.

Aside from having impressive hair, Leaupepe has played for the Australian national team at the 2017 Albert Schweitzer Tournament and winning gold at the 2017 FIBA U17 Oceania and 2018 FIBA U18 Asian Championship.

Regardless of his throw back hairstyle, Leaupepe is a star in the making in the West Coast Conference and should be a key figure for head coach Stan Johnson as he looks to return Loyola Marymount to their glory days of the late 80’s and early 90’s under the greats Hank Gathers and Bo Kimble. 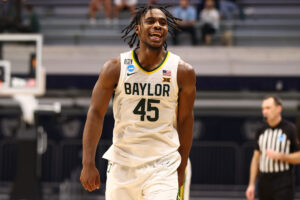 Trending
My March Madness starting five for the 2021 NCAA Tournament