The Mid-Eastern Athletic Conference (MEAC) announced their postseason awards and All-Conference teams for the 2020-21 season.

Tarke is the only player in D1 to average at least 16 points, eight rebounds, three assists and two steals per game. He also ranks third in the MEAC in points per game (16.4) and assists (78), and seventh in field goal percentage (47.4) and assist/turnover ratio (1.1).

Tarke played his first two years at NJIT before transferring to Coppin State prior to the start of the 2018-19 season.

Nendah Tarke (the younger brother of Anthony) was named Rookie of the Year after an impressive freshman campaign for Coppin State where he averaged 9.6 points, 4.7 rebounds and 1.7 steals per game while shooting 50 percent from the floor. 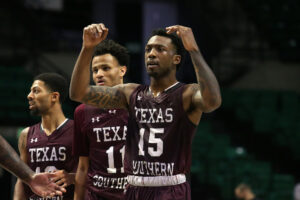 Florida A&M’s Robert McCullum was named MEAC Coach of the Year after leading the Rattlers to a 7-4 record in the MEAC Southern Division this season.