Many pundits have pegged Gonzaga as the No.1 team heading into the 2021-22 NCAA basketball season.

The Gonzaga Bulldogs came within one game of completing the perfect season during the 2020-21 college basketball season.

The Zags went 31-1 losing in the national championship game to Baylor 86-70 and followed that up by losing Jalen Suggs, Corey Kispert and Joel Ayayi to the NBA.

Suggs was selected No.5 overall by Orlando with Kispert being taken No.15 overall by Washington. Ayayi went undrafted but quickly signed a two-way deal with the Los Angeles Lakers.

With Gonzaga losing three of their best players in program history to the NBA it would be natural to assume the Zags may be in for a rebuilding year in 2021-22.

However, that is simply not the case with return of Drew Timme this season who likely would’ve been drafted or at worst case signed a two-way deal in the NBA. Canadian Andrew Nembhard will also return and he too is expected to garner NBA attention next season.

Gonzaga also signed two McDonald’s All-American’s including the No.1 recruit in the class of 2021 Chet Holmgren who is a 7-foot centre from Minneapolis, MN where he played at Minnehaha Academy which is the same school Suggs played for prior to coming to Gonzaga along with Hunter Sallis who is a 6-foot-5 guard from Omaha, Nebraska.

The Zags also picked up a Rasir Bolton via transfer from Iowa State where he was named Third-Team All Big 12 in 2020-21. The 6-foot-3 guard from Virginia averaged 15.5 points per game last year which ranked No.7 in the Big 12. Gonzaga is Bolton’s third school after starting his career at Penn State where he averaged 11.6 PPG as a freshman. 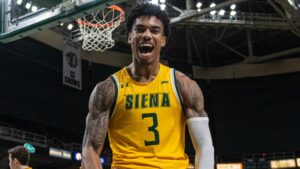 Look for Gonzaga to make it 23 straight appearances in the NCAA tournament come March of 2022 and once again contend for a national championship.