Murray State guard Tevin Brown is within reach of his schools all-time three point record and more in 2021-22.

Tevin Brown is a 6’5 junior guard from Fairhope, Alabama who is within reach of setting some impressive landmarks in school history along with the history of the Ohio Valley Conference.

Brown is currently third all-time at Murray State with 248 three-pointers made behind Frank Allen (251) and Isaiah Canaan (304). Canaan is second all-time in the OVC behind Joe Sibbitt with 319 who played for Austin Peay from 1995 to 1998.

Brown is 71 three-pointers made behind Sibbitt with 72 giving him the all-time record.

Brown was first team All-OVC for the second straight year in 2020-21 while averaging 14.7 points per game.

Murray State head coach Matt McMahon spoke about Brown and said, “He’s had such a great career and what I hope is that we’ve added some experience, talent and versatility on the perimeter so where he doesn’t always have to be the primary option on every offensive possession and he doesn’t always have to guard the other teams best offensive player. McMahon added, “So I hope that will open him up to get some higher quality shots.” 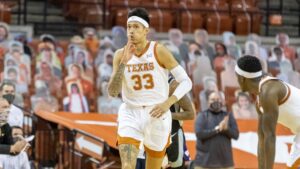 Trending
Kamaka Hepa in search of redemption at Hawaii

Brown does have an extra year of eligibility remaining after this year if he chooses to use it but he will also be weighing NBA and other pro options following the 2021-22 campaign.

The Racers were 13-13 during the 2020-21 season but should improve on that total this upcoming season with the return of Brown to the line-up.

The OVC features some stiff competition with the likes of Belmont, Morehead State and Eastern Kentucky but look for the Racers to be in the mix for the OVC title come March.

Early shockers from the opening weekend of March Madness

UC Irvine one of the best kept secrets in college basketball